In spring of 2015 we implemented a variation of the "bucket flush" concept. If you search with terms like "bucket flush graywater" there is plenty of material out there, but all of it that I found is either too complicated (involves plumbing) or talks in generalities.

We have been using a bucket flush system in both bathrooms for about six months now; this is a write-up of exactly how we did it, and how it has been using it in practice.

I found these plastic organizer boxes from Really Useful Boxes at OSH, and it turns out they're available online direct from the manufacturer for about what I paid at OSH (just over $10 each). While they are not the cheapest organizer boxes, I chose them for a number of reasons. On top of being very sturdy, they are wide-mouthed for catching water, a good size for the shower stalls and are a manageable for kids to carry and pour. They hold 8.1 liters (about 2 gallons) each. You won't need the lid, and the handles pop off easily if you don't want to use them. 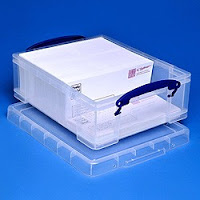 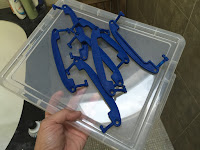 In one bathroom, the shower is in a curved tub, so the fact that they stack is important. We have four in this shower, which means we can capture up to 8 gallons of warm-up water, but most of the shower still goes down the drain. 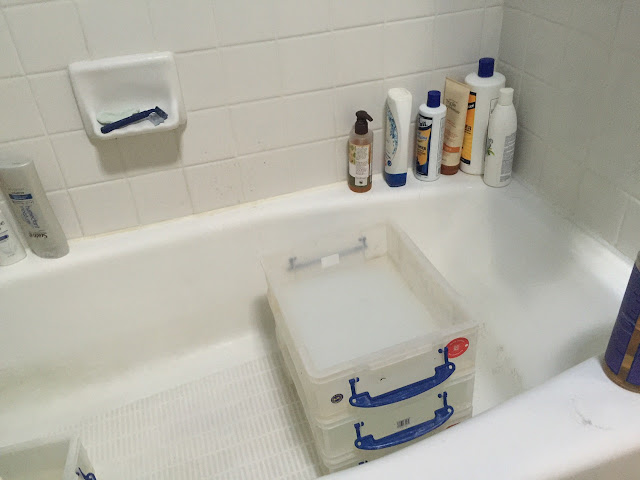 In our other bathroom, the shower has a flat bottom, and four boxes can all fit under the shower at the same time. This is why it's also important that the boxes we chose are sturdy, because I resolved to find a light-weight deck to place on top of the boxes, so we could catch most of the shower. 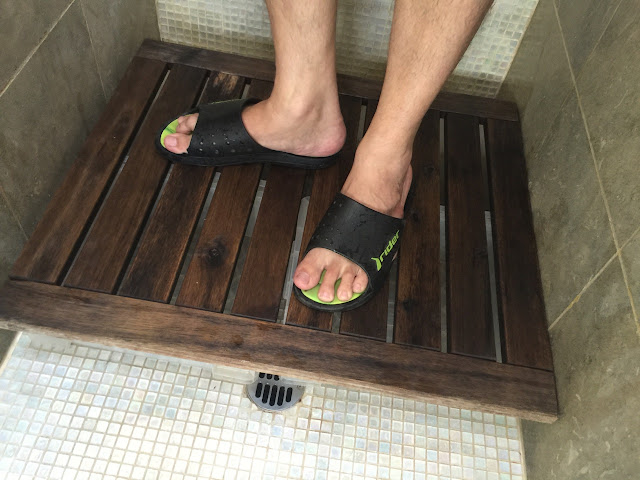 We used a drop-leaf recycled from an old outdoor IKEA teak table. It was cut down to fit the shower stall. This has worked out really well. The table was a few seasons old, and the drop leaves had begun to dry out and loosen up. Since it gets wet every day, the wood is swelled back up, and the joints are not loose at all. It could hardly be a more perfect platform. 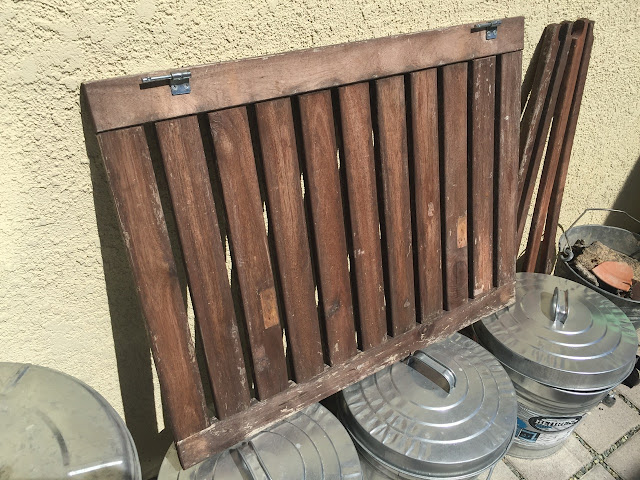 The table itself is still good. In fact we like it so much, we bought a second one. We can still use the older one without the drop-leaves. 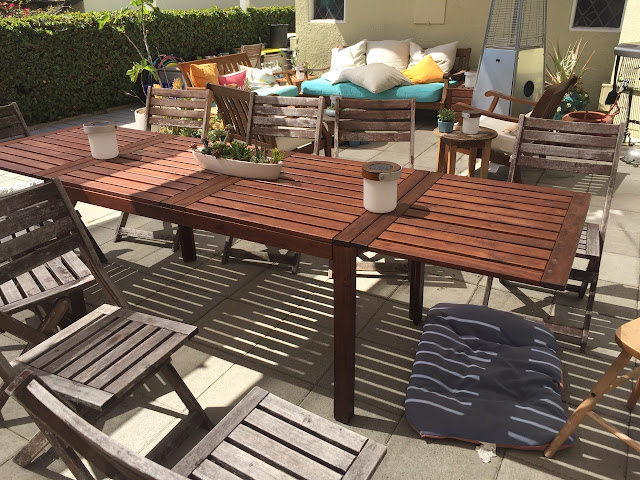 After a shower, we lift the deck so it can drip-dry, and gives easier access to the water boxes. 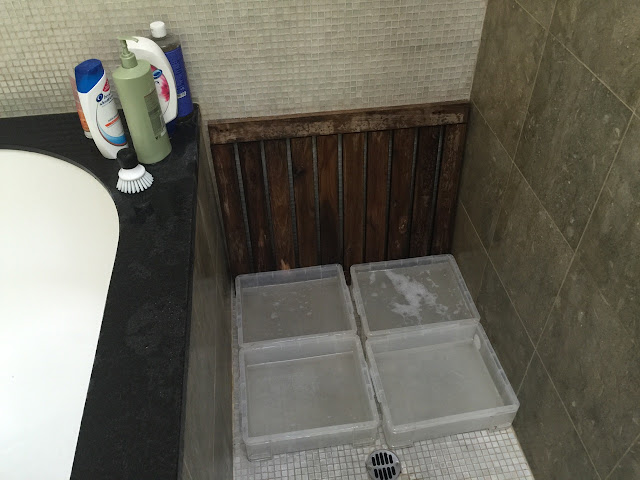 
Once you have a system in place for catching the water, even if it's just the warm-up from your shower, then next issue becomes what to do with it. As you can see from the pictures above, you will get shampoo and soap in the water. If you're catching the whole shower, obviously you'll also get some hair in it. More on that in a minute.

This kind of water is good for flushing the toilets, watering outdoor plants, mopping or outdoor cleaning. That's exactly what we use it for, in that order. 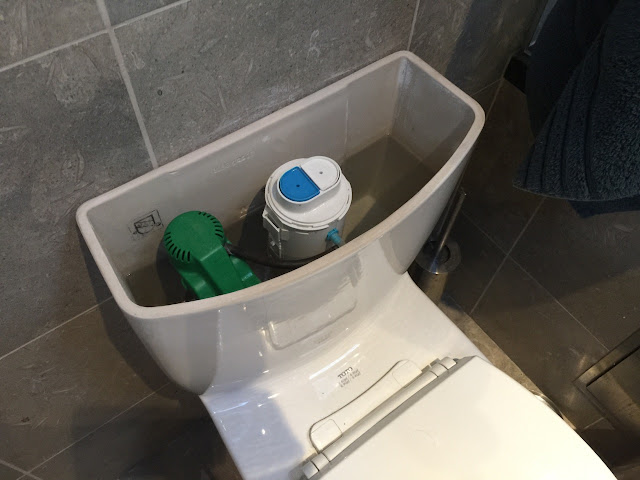 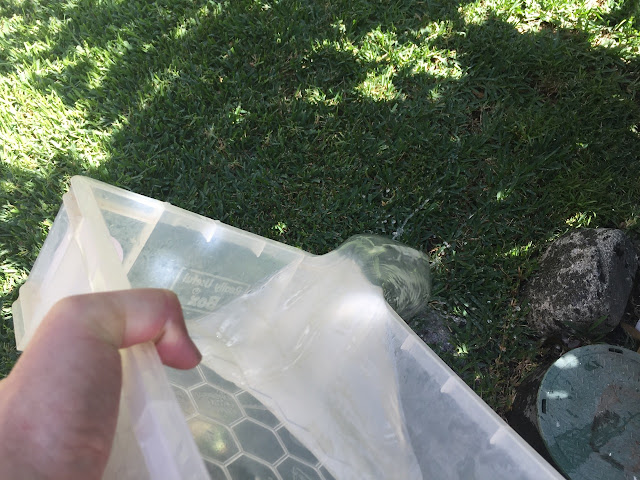 As you can infer from these photos, we don't pour the water into the toilet bowl directly. Instead we've removed the covers from the tanks, and we flush normally, then fill the tank with gray water.

Setting up the Tank


The first thing I did is remove the tank cover from the toilet and store it somewhere out of the way. 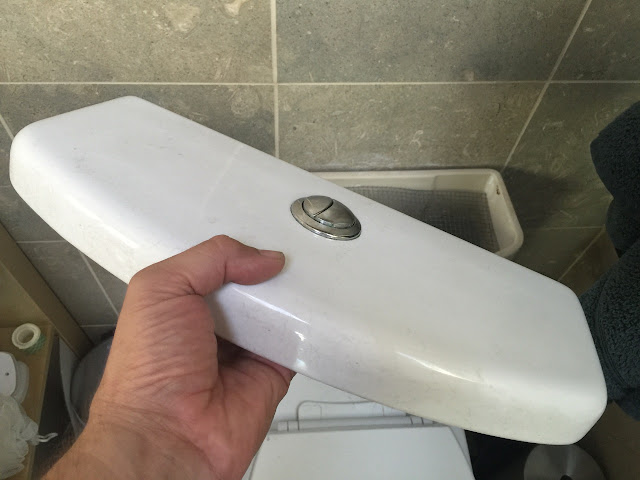 Next, I turned down the tank fill valve to a trickle, so it will eventually fill on its own in case you don't have gray water handy.

After a toilet flush, use water from one of your boxes to refill the tank. As I mentioned before, if you're catching the whole shower, you will find that you get some of the hair that would normally build up in the shower drain, and that can be a maintenance issue. I'll talk about maintenance next, but to prevent it from getting into the tank in the first place, I cut a piece of galvanized hardware cloth to fit inside the tank, and that acts very much as the screen on the shower drain does, preventing most of the hair from getting into the tank. 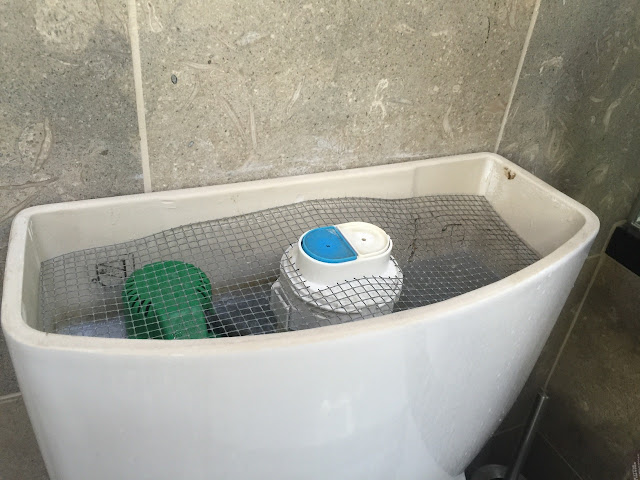 
I hope this section is the most useful one, because there's very little I've found online that talks about the actual real-life issues that come with a system like this in daily use. I've found them to be very minor, but let's just be frank about the fact that implementing a system like this adds a couple minor chores to your list.

The three basic supplies I find are required are: 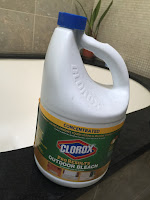 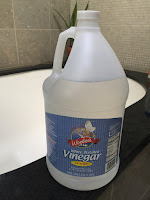 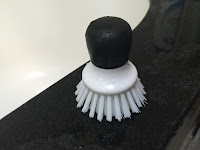 Optional (and not directly related to using gray water) 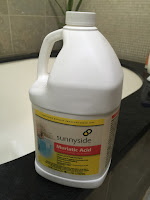 First of all, let's just talk about chemical safety. Never use the acid and the bleach at the same time. If you choose to use muriatic acid, you must use all the recommended safety precautions. While you can buy it at the hardware store, you must treat it with respect. It is a dangerous chemical, and should never be left where small children or animals can get to it. And remember your middle-school chemistry mantra, "Always Add Acid".

You will find that the boxes get a film of algae growth on them over time, so every couple weeks when you have all but one of them empty, you can add a small amount of bleach to the water (follow the directions on the bleach container), and then use your brush to wash the boxes with your weak bleach solution, inside and out, then let them air dry.

The tank is designed to hold potable water, so normally you wouldn't have to worry about bacteria, algea, etc. As a precaution, I periodically add a few drops of bleach to the tank to ensure than no colonies get started in the tank. You will have slightly cloudy and sudsy water in the tank once you start using gray water in it. This hasn't caused any problems for us, and I can't see any reason why it should be bad, other than the potential to gradually cause more build up than would ordinarily happen, if you have hard water like we do.

We have hard water (slightly above neutral pH; slightly alkaline). From what I've read, many water districts choose to balance drinking water a bit above neutral, rather than under, because they prefer a mineral build-up that gradually narrows the inside of the pipes over slightly corrosive water that eats them away. At our house we see distinct mineral buildup on all our faucets, etc. Add the soap residue that comes with using gray water, and I choose to lower the pH in the tank now and then, but only when I haven't already added bleach (never mix acid and chlorine bleach). Vinegar is a very safe choice for this, and will help clean mineral buildup. If you use it safely, and don't over-concentrate it, you can use a small amount of muriatic acid, but as I've already said several times, you must use every recommended precaution if you choose to use a strong acid.

I am a little concerned about getting clogs from hair. So far we've seen hair making its way through the bowl-rinse flow holes, requiring a bit of extra bowl maintenance, but adding the screen over the tank has stopped most of the hair from getting into the tank. You'll need to clear off the screen now and then when the hair builds up, just like you would on the shower drain.

As I mentioned, if you use a screen over the tank, you shouldn't have much trouble with hair making its way through the rinse holes. That said, some inevitably will, so you will see them along the sides of the bowl. They are very easy to clean. I typically use a bit of bleach solution and my little scrub brush. But NOT when I've already added acid to the water. Don't mix chlorine bleach and acid unless you like breathing chlorine gas…which you don't!

As you can see from this photo, the bowl generally has slightly cloudy and sudsy water in it, but it's easy to keep the bowl clean, as long as you don't feel squeamish about wiping out a few hairs now and then.

This really has nothing to do with gray water use in particular, but since it's impractical to get the bowl completely dry, a weak acid like vinegar or CLR cleaner will typically not be sufficient to dissolve mineral build up at the bottom of the bowl. As long as it is used with all the recommended precautions, stronger acid can be added to the water to lower the pH enough to dissolve mineral build-up in the bottom of the bowl. 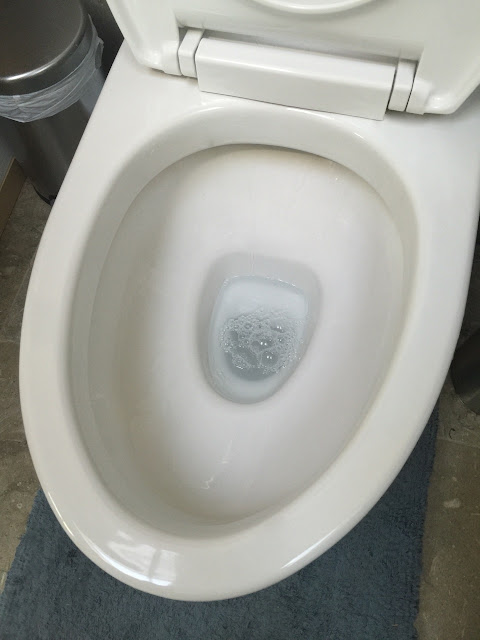 In practice, the bucket flush idea has not been a problem for anyone in the family. While it may not be the most dramatic change in terms of actual gallons saved, I think it has had one really important effect, which is making our teens more mindful about how they use water. While it does add some trivial chores to the month, it's not a burdensome thing to implement, and in my view it has been a success mainly because it makes us all think about water use differently.

Taking all our water habit changes together, including major changes to our landscaping that require less irrigation, mindful showering and water use habits, and bucket flushing, we have cut our water use by around 60% month over month in 2015, compared to 2014.